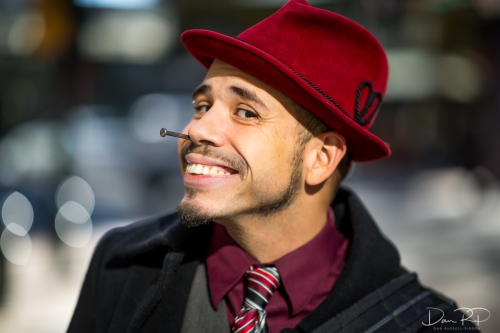 Our next stranger is a fire-breathing clown who was uptown getting a permit from the fire marshal for an upcoming show.

“I’ve been performing with fire for five years. I’ve been a third generation sideshow performer most of my life. I’m 37… it’s safe to say I’ve been entertaining for at least 27 years.”

What advice would you give to your younger self? “I would remind my younger self to be patient. My impatience caused a lot of my own frustration. If I would have just sat back and enjoyed the time as it passed, I probably would have enjoyed it a lot more. In my older age I have learned to kind of shut my mouth but open my ears a little more. Someone told me ‘To show patience is to move gracefully through time’.”

What do you think is the biggest misconception that people have about clowns? “Oh, wow! The biggest misconception about clowns is that we want to steal your kids. Personally, I don’t even like children. I’m not that kind of clown. I do adult parties. With the popularity of Stephen King’s IT and American Horror Story… and there’s a legitimate fear called coulrophobia, which is the fear of clowns. With those things resurging in popular view, it’s kind of put a negative stigma on clowning.”

Where do you want to be in ten years? “In ten years what I would love to do is to have a traveling circus with a cast and crew of people that I trust and love dearly. We can travel around and remind the world how great and entertaining this place can be. Once we have a full run and kind of tire out the tour buses, I’d like to setup a circus school and kind of teach the next generation how to keep this culture alive and how to entertain the masses. That’s the grand scheme. We’ll see how it goes.”

Technical Notes: We were in a bright area with the sun reflecting strongly off a nearby building. I used a reflector to try to even out the light. This is my first portrait with my new 85mm lens.