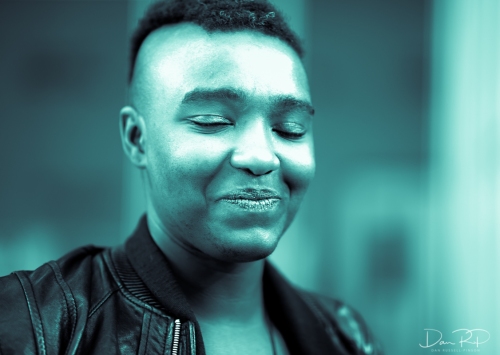 Now how does poetry relate to that? “We write poetry about that. We have a doctor, a patron of the arts person, who’s brought us here kind of on his dollar. He just kind of fed us material and literature from his practice and we wrote poems based on those documents.”

Are you trying to be as interesting as possible? “{laughs} Yeah, we ration it. {laughs} But, yeah, so that’s why we’re here.”

What advice would you give to your younger self? “To my younger self, I would say… speak my truth from my guts. Because I think that’s the one thing I didn’t do very often when I was like in my early twenties.”

What woke you up? “A massive mental health crisis actually… and then I recovered through poetry. So, I just kept writing, got gigs, got jobs, furthered my skills with creative writing instruction as well as spoken word.”

How would your friends describe you? “My friends would describe me as strong, generous, probably like a little bit moody, moody is the thing, outspoken… and I guess wise. My pen name is Dwennimmen, it’s a West African name, from a dictionary of symbols called Adinkra. It means strength, humility, learning and wisdom. That’s why I chose it as a pen name.”

You just gotta grab that big spoken word poetry money… “Yeah, you know, I just gotta reach out and take it. {laughs} It’s an interesting thing trying to create a job description out of that or trying to find a role in my local economy that will keep those skills sharp and keep me rejuvenated and healthy. Because that is something that pulled me out of my crisis… it’s like I have to keep doing it.”

Technical Notes: This stranger encounter was a comedy of technical errors. About a third the way in, I realized that my camera was set to f11 aperture. Those pictures came out dark and flat. While trying to hastily fix the camera settings, I somehow switched the camera to manual mode. Then I ended up taking the rest of the photos in whatever settings were already dialed in which produced overexposed images. I was sick when I got home and discovered this. However, I was able to convert this image to black and white, dial down the exposure and add contrast and coloring. Ironically, all of those errors forced me to be more creative in Lightroom and helped me produce an image that I wouldn’t have otherwise created.