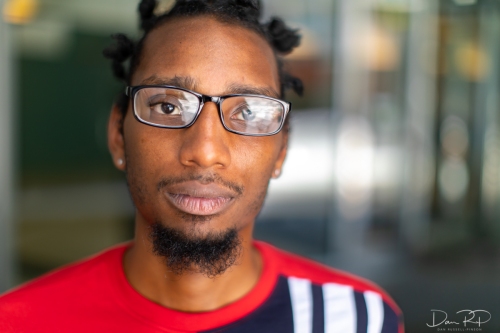 “You gotta go make some moves as far as making a legacy for yourself before you leave the Earth.”

What advice would you give to your younger self? “Whatever you plan on doing in the future as a passion or a career or job, whatever, just make sure you go hard… 110%.”

Have you always done that? “Lately I have… not always.”

What made you clue in to that? “Because reality sinks in, and you realize you can’t just sit around procrastinating. You gotta go make some moves as far as making a legacy for yourself before you leave the Earth… because you know you have to go at some point.”

What is your biggest challenge right now? “Trying to make it music-wise. I make music so… Trying to make it as an artist today with so many more emergent artists coming out everyday… it’s kinda hard.”

Tell me about your music…. “Basically, I just talk about my lifestyle. I don’t talk about killin’ people and none of that stuff that the majority of these people who make rap music or hip-hop music talk about nowadays. I talk about things that people can relate to.”

So authenticity is important? “Exactly.”

What are your goals? Where do you want to be in ten years? “I just want to be living comfortably… as little worries as possible.”

If you could put a billboard up in Charlotte, what would it say? “It would say something about unity… not just one’s own race, but all races. If you look at society today whites they stick together with they own race, not to say that they don’t help others, but… that’s how it just go… races stick together. But, if it all comes together… I think the world will be a better place as far as unity goes.”

Technical Notes: I used a reflector to add light to Quay’s face. I did my best to reduce the glare in his glasses, but I couldn’t find an angle where there wasn’t a lot of glare.