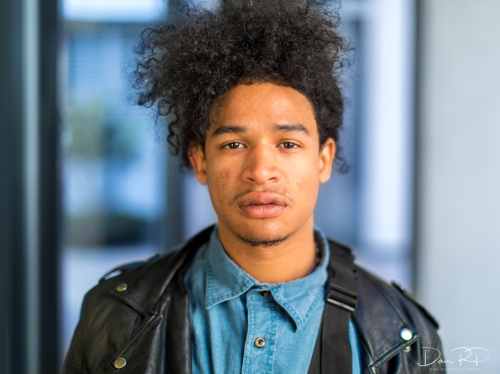 “Love one another and maintain.”

What are you doing uptown? “Just chilling before I go to work. I went to go like meditate for a second. I closed my eyes and enjoyed the sounds of nature.”

So do you meditate everyday? “I used to. I might get back to the swing of things.”

What advice would you give to your younger self? “Stick to yourself.”

What is your biggest challenge right now? “Just getting back on the good foot. To get equilibrium.”

What are your goals? Where do you want to be in 10 years? “Maybe I’ll have sold a bunch of music. Have a good life. At least maybe I have my own house to share with my son.”

What kind of music do you make? “I do rap, rock and R&B. I even like some electro-funk kind of thing. I just work by myself. I write music… I’ve wrote like 320 records. Yeah, I wrote a lot of songs.”

If you could put a billboard up in Charlotte, what would it say? “Love one another and maintain.”

Technical Notes: We were under an overhang near the side entrance of a bank. Julien was lit from his left side and I used a reflector to even out the light on his face.

I’ve been very motivated lately and just completed my fourth painting in two weeks. My stay-wet palette has allowed me to reuse the same paint for all four paintings although, after two weeks, some of the paint was feeling a little tacky. I’ll start with fresh mixes on the next one.

I approached this painting with a similar process as my Tom Waits and Thelonious Monk portraits — alternating between realistic skin tones and more colorful hues. Like the other portraits, I found that a simple solid background makes the face pop. I added some paint splatters using Yellow Ochre and Burnt Sienna. I got a little carried away especially with the dark Burnt Sienna on some of the lighter parts of the face. I ended up tapping out some of the excess splatters on the nose, cheek and chin. This one took about 11 hours.