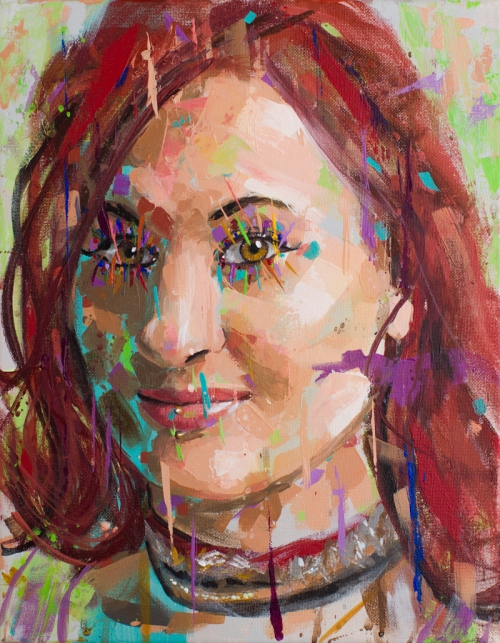 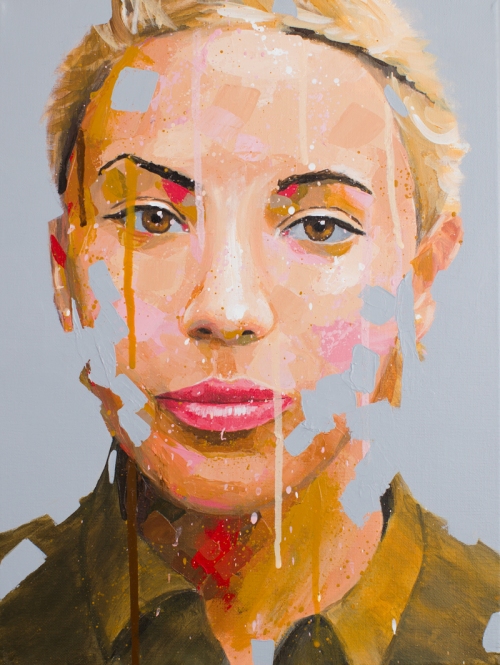 I used the Zorn limited palette for this one — basically just two colors — Yellow Ochre and Cadmium Red (along with Mars Black and Titanium White).  If you’re wondering how the green was produced, the Mars Black has a blue bias, so when it’s mixed with Yellow Ochre, you get a limited range of greens.

I used a small palette knife for most of this painting and am very happy with the result.  I feel like I’m inching ever closer to the style I want to achieve.  This painting required a looseness of mind that doesn’t come natural to me.  I still have the urge to “paint within the lines” and make everything look as realistic as possible. 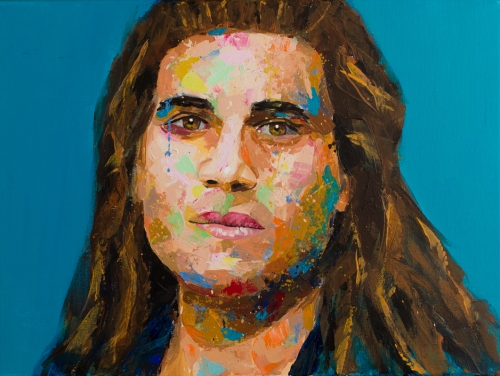 It’s been exactly a year since I last painting something.  I did this stranger portrait yesterday as a way of brushing off the cobwebs.  It’s amazing how much you forget in just a year.  I’m hoping to ramp back up and create some more work soon.

Here they are… my 100 Strangers family in one image. It’s been an amazing journey.

Most all of my previous creative pursuits have involved me working alone in a room… usually in front of a computer. Learning to paint was a breath of fresh air, but still I was spending my time alone (just in a different room). After experimenting with painting many different subjects, I found myself drawn to painting portraits of people.

During this time I was puzzled as to why I was so attracted to playing Pokémon Go. Then I realized… it wasn’t actually the game itself but just getting outside and having an adventure. When I learned about the 100 Strangers Project, it immediately clicked in my mind that this was the adventure I needed to pursue instead.

It’s hard to put into words what this project has meant to me. It’s certainly made me a better photographer, but it was the human interaction that made it all worthwhile. I’m an introvert, so the prospect of approaching complete strangers on the street was a bit daunting. To my surprise, I discovered that it’s something I’m pretty good at.

I assumed that the vast majority of the strangers I approached would say no and that I’d have to push through tons of rejection to find a willing participant. To my surprise, I found the exact opposite. Of course there were people who declined (maybe less than 20), but they were almost always friendly.

One of the biggest benefits of this project is that it forces you to focus your attention on other people as opposed to yourself and your ego (which might be the source of much of our unhappiness). You cannot help but be challenged and be humbled by all of the people you meet. Some are well off, some are getting by and some are struggling in ways that I can’t even imagine. Generally speaking, we all want the same thing.

Looking at this image of 100 strangers makes me smile. I remember their names, where I met them, their personalities, their challenges and their dreams. Some have become friends. Some I keep up with on social media. For the vast majority, I have no contact with them at all. I hope they are all able to see their portraits (or will discover them sometime in the future), and I hope it makes them smile too.