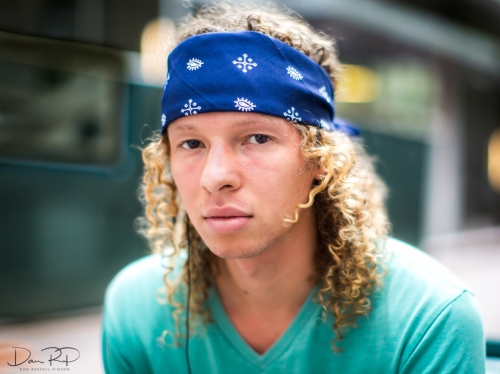 On the Saturday evening before Halloween, amid the horde of costumed party people, I spotted this young man who reminded me of a young Leif Garrett.

Josiah was born in Charlotte and was hanging out uptown making plans to see a concert and go to a house party later on.

Are you a student or do you work? “I was working. I worked construction. But I haven’t got paid so I stopped working… I don’t really like to work for free.”

“I’m getting back in school. I’m supposed to be going back to NC State.”

What are you studying? “Physics. I just like it.”

I told him how hard my Physics class was in college. “Well, they try to make it that why because they’re trying to dissuade people. I think that’s a bad idea. I think they should teach it properly.”

I told him that I admired Richard Feynman. “I think if anyone takes a course in Physics, they should read his books. He explains it intuitively. I think he had a saying that ‘if you can’t explain it to your grandmother, you don’t know it well enough.’”

We talked for a while about David Deutsch and Lawrence Krauss…

What do you do for fun? “I love music… music and playing on my guitar.”

Yeah, me too… “I figured you might be a musician.”

What advice would you give to your younger self? “Don’t do as many drugs. {laughs} I mean, I probably still would, just knowing me. I don’t know, just… live in the moment.”

Is that something you’re able to do? “Yeah, I can’t get out of it. {laughs} I wish I’d lived in the moment younger. All I did was think. I was stuck in my head too much. And, there’s a whole world out here…”

It was great to meet you Josiah. Thanks for participating in my 100 Strangers Project.

Technical Notes: I didn’t notice how much Josiah was backlit. I was able to bring up his skin tones in Lightroom, but it would have been better to reorient him or use a reflector.