I’m very excited to announce the (re)release of Collider! Collider is a physics-based puzzle game that I originally released in 2009, but sold to another company in 2010. Recently, I purchased the game back and am very happy that it’s now back in my portfolio.

Collider is available for iPhone and iPad in the iTunes App Store!

The goal of collider is to place the positive, negative and neutral particle balls from your tray onto the screen and make all positive and negative balls collide and vaporize. 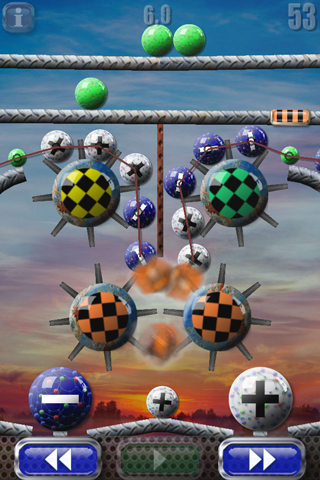 You must navigate an array of pipes, gears, platforms, gates, sensors and other obstacles to achieve your goal.

Collider for the iPhone is Released!

After two months of intense development, Collider for the iPhone is finally released!

Collider first hit the scene as a Flash game in April, 2009. I started learning iPhone development soon after and released a port of my Flash game Block Drop followed by Furballs!. I’m glad I waited a while to port Collider because I needed everything I learned from the first two projects to even think about creating a game this complicated.

The iPhone version features updated graphics including brighter, more colorful background images. I was also able to preserve the dynamically generated music so each level has a different musical composition. Collider for the iPhone also features a much requested new feature, a fast-forward button, as well as an “auto-save” feature that allows you to quit the game at any time and resume playing right where you left off.

About Collider
Collider is an addictive, physics-based iPhone game featuring 56 intricate levels of play and dynamically generated music. Your goal is to destroy all of the positive and negative particle balls. Simply drag the particle balls where you want, press play and watch them come to life! Navigate them through pipes, gears, sensors, bombs, springboards, pendulums, seesaws and more to make them collide.

Collider Reviews:
“Collider the Game is definitely a nice physics puzzler with some great level design that is both challenging and rewarding.”
– TouchGen

“Enjoy hours of fun with this unique puzzle game!”
– AppShouter

“The graphics are surpurb, the physics life-like, and the dynamically generated music really combine to produce a game well worth the $0.99 price tag”
– 1st Impressions

“It has great original graphics, it’s casual, easy to access and play, but also features some hardcore levels that are really hard to beat!”
– ProjectNext

“I really liked it. I thought it was a great, fun game.”
– iPhoneSlutz

Charlotte, NC – Local Mom, Margaret Johnson, always believed that she was destined for some greater purpose. She just didn’t think her higher calling would come from a piece of toast.

During a routine morning of making breakfast for her two children before school, Margaret practically jumped through the ceiling when the toaster popped up and revealed two strange ball shapes burned right on the toast. Knowing that her life was forever changed, she quickly parked her kids in front of the TV and after five hours of non-stop web surfing, Margaret finally discovered the balls came from an iPhone game called ‘Collider’.

Quickly pulling out her iPhone and searching the App Store, Margaret was shocked to discover that Collider would not be released until the end of the month. Then things got weird.

“She just keeps searching the App Store over and over for Collider” said her oldest daughter Kimberly. “It’s like she’s possessed…”

“Hungry… so very… hungry…” added Timothy, the youngest child, who hadn’t eaten since dinner the night before.

Margaret was completely unresponsive until her daughter loaded some Collider screenshots onto the iPhone. “Now she’s just randomly tapping the screen trying to play Collider! But… at least it’s an improvement…”

Margaret’s husband finally returned home from work and took control of the situation. Through the local press, he made a short statement to the developer of Collider. “Please, for the love of God, release Collider as soon as possible and help save my wife!”.

Chicago, IL – In a desperate effort to promote his upcoming physics-based iPhone game, Collider, game designer Dan Russell-Pinson launched a risky and expensive promotional campaign involving skywriting the name of his game over the skies of Chicago. It was a beautiful, crisp day and all signs were “Go” for takeoff.

As a crowd in downtown Chicago slowly assembled to see what the commotion was all about, it became clear that something was terribly wrong.

“Why would anybody want a colander for their iPhone?” asked an obviously confused onlooker. “Wow, I guess there is an app for everything…”

Apparently, there was miscommunication between Russell-Pinson and the pilot of the skywriting plane. The message, which was supposed to read “Collider for iPhone”, ended up coming out as “Colander 4 iPhone”. This put the clearly distressed game designer in the unfortunate position of being thousands of dollars in the hole before the game has even been released.

Game Designer Humiliates Himself in Desperate Plea for iPhone Success

Charlotte, North Carolina – Game developer Dan Russell-Pinson resorts to begging iPhone game reviewers to give him publicity, defacing famous works of art and making juvenile jokes about balls in order to promote his new physics-based iPhone game called Collider, due to be released by the end of January, 2010.

“It’s pretty sad” says a close friend who didn’t want to use his real name. “He used to have so much self-respect and confidence, but the drive to push Collider into the Top 100 of the Apple AppStore has made him… regress”.

His slide into immaturity was evidenced when he released a promotional video for Collider (see link below) which depicts well-known works of art shamelessly defaced to include the positive and negative particle balls from the game. As if that wasn’t enough, Russell-Pinson is also using the tagline “Do you have the balls?” as part of the promotion.

“Did he have to go there? I mean really…” says another close friend who also refused to give their real name. “Is he still in Middle School or something?”

To make matters words, the game designer has also been witnessed practically groveling to any and all iPhone game reviewers who will listen to him in a desperate attempt to gain pre-release publicity for Collider.

Concerned friends and family, currently planning an intervention, released this statement to all members of the media: “We’re simply asking that all iPhone game reviewers please just give Collider a little attention, maybe a small blog post, something… anything!”. When asked what could happen if Collider isn’t successful, they said “I don’t know… He might do something desperate like make a sequel to Furballs or worse, create more videos…”.

About Collider:
Collider is an addictive, physics-based iPhone game featuring 56 intricate levels of play and dynamically generated music. The goal is to destroy all of the positive and negative particle balls on the screen by making them collide together. An auto-save feature automatically saves your progress so you can suspend the game and continue playing where you left off at a later time.

Dan Russell-Pinson has been independently creating online flash games since 2007. His best known titles are Tipping Point, Block Drop and Collider which can be seen on hundreds of web sites across the Internet. In 2009, Dan moved into the iPhone arena with a port of his popular game Block Drop followed by his second title Furballs! and is currently promoting his third iPhone game Collider. Copyright (C) 2010 Dan Russell-Pinson. All Rights Reserved. Apple, the Apple logo, iPhone and iPod are registered trademarks of Apple Inc. in the U.S. and/or other countries.

Other web sites have picked up the story:
TouchMyApps.com

Collider for the iPhone – Creating Some Buzz Before the Release

In my effort to promote my latest physics-based iPhone game, Collider, I’ve just released this promotional/gameplay video called “Collider: Do You Have the Balls?”. I created it completely with iMovie. Have look here:

Posted on April 1, 2009 | Leave a comment
My latest game, Collider, has just been released!

After finishing Block Drop, I started experimenting with the Box2D physics engine and those experiments turned into the game Collider. The game took about two months to design and code. Much of that time was spent learning Box2D and designing the 25 levels in the game. Creating challenging levels that were fun (but not too easy) was quite a challenge, but I’m pleased with the end product.

The music of Collider is dynamically generated using the same music objects that I designed for Block Drop. This time though, there are five different instruments including bass and drums. Instead of making completely random music, I decided to write a number of different drum lines, bass lines and melodies and use those as the basis for the music. To create a unique composition, the algorithm simply selected different drums, bass and melodies at random. The individual musical parts were further randomized by randomly swapping the notes within them.

All in all, Collider is the product of a lot of work and headaches, but I think it’s all worth it in the end. I hope you enjoy playing Collider and don’t be afraid let me know what you think.

You can play Collider here: 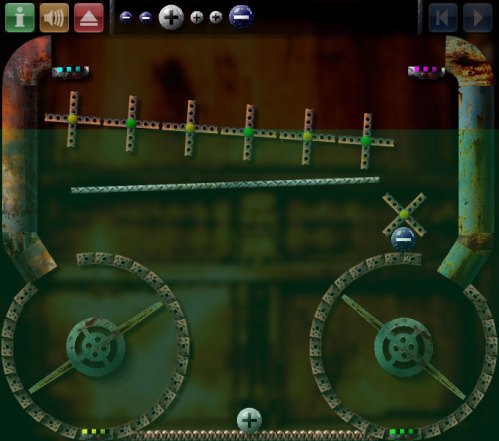