I’m very happy to announce that Tipping Point is now available for PC & Mac on Steam! Now you can finally experience the adventure on your desktop computer. This is currently the best version of the game available with cleaned up graphics and sound effects. All of the music in the game has been remixed and remastered, and the soundtrack is included with the purchase of the game.

I’m very happy to announce the release of the Tipping Point Soundtrack!  All of the music  from my point-and-click adventure game has been remixed & remastered and is now available to download.

Most of the music was recorded 25 to 30 years ago, so a lot of work was put into cleaning up the original master recordings.  The Tipping Point game has been updated with the new versions of the music. Note: Tipping Point will be available on Steam soon for PC & Mac.  The soundtrack will be included with the purchase of the game.

Tipping Point is now available for android tablets and Windows 8!

I’m very excited to announce that my adventure game, Tipping Point, is now available for android tablets and Windows 8! This is the complete game including the new chapter 5. I hope you enjoy it and please be sure to tell your friends!

Tipping Point is available for iPad in the App Store and for Mac in the Mac App Store.

After many years in limbo, my Tipping Point adventure game series is finally completed with a new release for iPad!

The Tipping Point project began in 2007 as an online Flash game, and, over the course of a year, the first 4 chapters of the game were released one at a time.  When the economy took a hit, I sadly had to put the project on the back burner.  Even four years later, I still received emails from players asking when/if the series would continue.

The full version of Tipping Point for iPad includes all 5 chapters of the game as well as an epilogue.  All of the graphics have been enhanced for the new platform and look better than ever.  Some of the puzzles have been modified to make them feel more natural on the touch screen.  One notable feature in the new version is a built-in hint system that gives you a nudge in the right direction whenever you get stuck.  You can also save the game progress for up to five players on the same device. 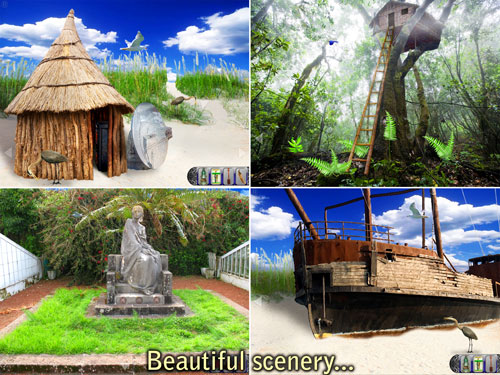 The new chapter 5 really propels the story forward by adding new plot twists and providing a satisfying resolution to the mystery.  We finally meet Tommy’s father and learn the secrets he’s been hiding.  An unexpected glitch in their teleportation technology summons something from out of this world and, suddenly, you find yourself at the center of the discovery that changes everything. 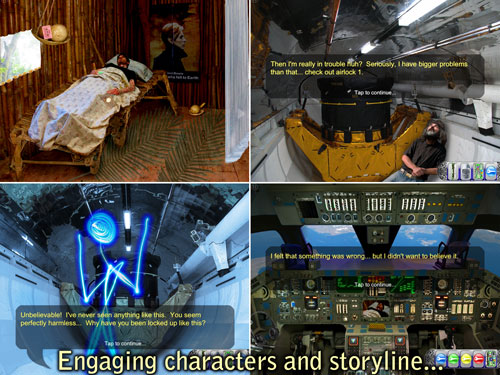 Watch the promo video below:

After months of work and a couple more looking for a sponsor, I’m happy to say that Tipping Point 4 is finally completed and available to play online.

Featuring 28 photo-realistic screens, 110 individual sound effects and 4 original songs, chapter 4 is by far the longest installment of the series. While you explore the environment and solve the puzzles you encounter, the storyline unfolds further including an unfortunate meeting with Tommy’s Father.

I hope you enjoy playing it as much as I’ve enjoyed making it!

Play Tipping Point 4 now by clicking on the link below:

Set in a lush jungle environment, chapter three contains more puzzles and mysteries to figure out. During this time, you also meet Tommy who summoned you on the adventure at the beginning of the game. Learn more about why you were brought to the island and what you have to do next.

Chapter 3 features original music, dialogue, many more puzzles than chapter 2 and even an Easter Egg.

After only 44 hours of being released, the game has been loaded 48,794 times and has been completed almost 4,000 times.

Here are some links to a few of the web sites that are talking about Tipping Point:

Well, Tipping Point has been public for about 8 days now and the game has been completed 10,825 times! More web sites from all over the world have linked to the game bringing in players from Poland, Latvia, France, Ireland, UK, Netherlands, Spain, Canada, Germany, Hong Kong, Luxembourg, Austria, Japan, Italy, Australia, Hungary, Brazil and more. On average, six people are starting the game every minute and someone is completing the game almost once a minute.

It’s been an exciting past couple of days. Since I was finished with chapter two of my adventure game, Tipping Point, I decided to submit it to a handful of game directories. On Wednesday evening, I submitted the game to about six web sites and then went to bed.

When I woke up the next morning, I discovered that Tipping Point had already been placed on the font page of a couple game web sites. People had been playing the game all night and were already discussing it online looking for help on how to solve the puzzles and etc. I also had about 30 people sign up for the mailing list.

I’ve received emails from all around the world including Poland, Hungary, Brussels, Italy, England and more. Their comments were so positive despite the slow load times (see below). I realize now that I need to be more conscious of non-US/non-English-speaking players. For instance, one part of the game asks you to press the “pound key” on the telephone and several players didn’t know what that was.

Several other game sites added the game to their home pages throughout the morning and before I knew it, I was getting more traffic than my server could handle.

As a result of all the traffic, my server was busting at the seams. The game was taking as long as 45 minutes to an hour to load for some people. Yikes! I spent most of yesterday trying the fix the problem. I managed to cut the size of the game files in half without severely affecting the quality of the game. I basically had to compress the images, videos and sound a little more. I’ll be upgrading my server next week (RAM, Ethernet card) to make sure this doesn’t happen again.

This whole experience has definitely motivated me to get started on chapter 3 as soon as possible. Stay tuned…

After a few months, I finally finished chapter two of my new game, Tipping Point. This new chapter introduces a few new features to the game. The main one is an inventory system which allows you to pickup items and take them with you from place to place. Chapter two also features new scenery and some original music too.

For more information and to play the game, visit the Tipping Point web site.